I’m excited to introduce you to Debbie Lynne Costello today because I certainly don’t think there are enough Medieval Christian books out there! (I love castles and knights 🙂 Make sure you enter the giveaway at the end of the interview! 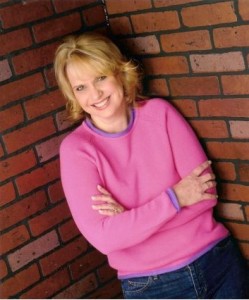 After the death of her cruel father, Brithwin is determined never again to live under the harsh rule of any man. Independent and resourceful, she longs to be left alone to manage her father’s estate. But she soon discovers a woman has few choices when the king decrees she is to marry Royce, the Lord of Rosencraig. As if the unwelcome marriage isn’t enough, her new husband accuses her of murdering his family, and she is faced with a challenge of either proving her innocence or facing possible execution.

Royce of Hawkwood returns home after setting down a rebellion to find his family brutally murdered. When all fingers point to his betrothed and attempts are made on his life, Royce must wade through murky waters to uncover the truth. Yet Brithwin’s wise and kind nature begin to break down the walls of his heart, and he soon finds himself in a race to discover who is behind the evil plot before Brithwin is the next victim.

If you could be one of your characters, who would you choose to be and why?

I’d choose to by Royce. (Just for your information, I have no desire to be a man! But I love his spiritual arc).  Royce struggles with being forgiven. He doesn’t feel worthy. All he sees is his past failings and how they have hurt people. I love how he wants to be a good person but he does it for the wrong reasons. And then God opens Royce’s eyes and heart and he not only sees real forgiveness but accepts it.

Were there any historical facts that you discovered in your research that made you change something in your story?

Yes, while researching I learned more about John Wycliffe and his Lollards. The history behind Wycliffe and his dedicated followers was fascinating and not something I’d heard much about. As I researched more about the Lollards, I discovered that they believed that every man and woman should hear the word of God and sought to get God’s word to the people. That gave me the basis for Pater.

Joseph and Frances Gies have several wonderful books when researching medieval topics. I used several of their books, Life in a Medieval Castle, Life in a Medieval Village, and Daily Life in Medieval Times.  I used Marriage and the Family in the Medieval Ages by Gies to write the wedding scene along with the words that were used for the ceremony.

Debbie Lynne has been nice enough to offer one ebook copy of Sword of Forgiveness. I’ll give away a copy of any book mentioned in the interview in ebook form. Enter the Rafflecopter below!

Also Visit Debbie Lynne’s Blog The Sword and the Spirit to enter the big contest she’s throwing for her release!

Thank you for having me here, Melissa! I’m looking forward to visiting with your followers.

When did you find out you wanted to be a writer? Did you read Christian fiction as a child?

Hey Jan, When I was young I wanted to be a veterinarian. I loved to write stories but never thought about an author. Then when I got older I thought journalism would be fun. I went to college for that. But I married and we started a family so I put that thought aside. It wasn’t until my last 2 children were in high school that I thought about getting back into writing and making a career out of it.. When I was a child, I read a lot of hardee boys and Henry Huggins books by Beverely Cleary.

Thanks for sharing with us Debbie! Is this your first release, and how long did it take from writing the book to getting it published? How many books are going to be in the series? Any tentative release dates for the rest of the series?

Patty! Thank you for coming by. I have a short story in Guideposts Books, A Cup of Christmas Cheer volumes 3 &4. They are a set of hardcover books. One is contemporary stories the other historical. Mine is historical. But this is my first full-length release. It took me 4 months to write the story, and then there are edits, and bookcovers and all the things that go along with it. I know there will be at least 3 books in the series, but I feel like there will be 5 or 6. There are so many characters that are wanting to have their story told. I don’t have an actual date, but hoping around November for book 2 in The Winds of Change Series. I do have a 19th century book that will be out in about 4 months.

I can’t wait to read the entire thing. Keep up the good work.

I like to live in the historical past, Kathy! LOL> That’s why I write there. Thank you for coming by!

Hello Debbie Lynn! CONGRATS on the release of Sword of Forgiveness. How has writing changed your relationship with the Lord? Blessings 🙂

What an awesome question, Carly! I’m not sure I’d actually say it changed my relationship, but what it did do is change the way I look at things. When I’m reading or studying God’s word, there may be some things I don’t struggle with but because of writing it has made me more aware that God has put it in His word because there are people who struggle with it and so now I think, can I use this in a story to touch someone’s life. With all my heart, I want my stories to more than just a good read (but I want them to be that too!) my hearts desire is to touch lives. If I can touch one life then I’ve made a difference. :o)

Hey, Deb ! My, but you really get around! I was just over at OWG and I could swear I saw you. Lol
Congrats again on your new release.

LOL! My steed is fast, Debbie! Thanks for coming by here to say hello. Have you stopped by MaryLu Tyndall’s blog, yet? Giving away a copy there too!

Yes, I stopped by MaryLu’s blog. 😉

Hi Debbie Lynne, I’m so excited to see your book is coming out! Congratulations!

Thank you, Carrie! This has been super exciting.

Would love to read the book!

Hey Beth. I hope you get a chance to read Sword of Forgiveness.

I love the premise of the story, as marriage of convenience is a favorite theme of mine. Just reading about your book puts me in mind of the clean-rewrite novels Tamara Leigh is publishing right now (probably because I just finished one). Have you read any of her books? What is your favorite genre to read in your spare time?
Thanks for the chance to win! Your book sounds wonderful (I promise, I’m not just saying that)!
~Sarah

Thank you, Sarah! I have not read Tamara’s books. I know she’s made them clean reads now so I should! Sounds like I need to. My favorite genre is definitely Christian Fiction Romance! Time period… that’s a bit harder. I love medieval (obviously!) but I do love the reconstruction period also.

Congratulations on the publication of Sword of Forgiveness. Book set in this time period are some of my favorites. If you haven’t read Jack Cavenaugh’s Glimpses of Truth, you might find it very interesting. I think it is a really good book. I’m looking forward to reading this book, and I’m so glad you are writing a series. (This isn’t really a question, obviously–LOL)!

LOL! Thanks Kay. Well, you did ask me if I read Glimpse of Truth! Thanks for coming by. And good luck!!!