Search through Christian Historical Fiction sorted by setting, period, historical events, and more.
No Comments on A Life Renewed by Olivia Rae

In 1554, Lady Jane Grey, “The Nine Days’ Queen” was executed for high treason. But what if, instead of feeling the blade on her neck she secretly survived?

Escaping execution, Lady Jane hides as a peasant girl in a principality in Germany. She loves the simple life and never wants to return to England. But her benefactor, a power-hungry German prince, wants to march on London and place her on the English throne again, thereby increasing his dominance in Europe. If she doesn’t agree with his plan, her beloved childhood nurse will be put to death. Desperate for help, Jane must put her trust in the mysterious spy Asher Hayes.

Asher Hayes is done rounding up Protestants for “Bloody Mary” and wants nothing more than to live a quiet life as a farmer and expunge the blood of many from his hands. Except Queen Mary isn’t done with him yet. She throws his father, mother, and sister into prison on false charges in order to force him to accept one last mission – find and kill Lady Jane Grey. But when Asher discovers Lady Jane isn’t a threat to the throne as he believed her to be, he faces a devastating decision – does he sacrifice his family for the woman who reigns in his heart?

No Comments on Follow the Dawn by Rachelle Rea Cobb

Anna Emory grew up the invisible, shy younger sister, and she prefers it that way. But when her father attempts to arrange an unsavory marriage, Anna learns that courage is sometimes found in adversity. Then she meets a boy and his father struggling in their relationship, and they tip her quiet world upside down.

Captain Mathieu Tudder has run from responsibility, entrusting his young son’s care to another and devoting his Sea Beggar ship to the Dutch Revolution. After that cause fails, Tudder returns to England for the son he left behind. But his son seems to have given his heart to a unknown and quiet lady—a woman who reminds him of all he’s ever loved and lost.

Will these two hearts—the battle-scarred and the broken—ever find true freedom?

No Comments on A Constant Heart by Siri Mitchell

Born with the face of an angel, Marget Barnardsen is blessed. Her father is a knight, and now she is to be married to the Earl of Lytham. her destiny is guaranteed…at least, it would seem so. But when her introduction to court goes awry and Queen Elizabeth despises her, Marget fears she’s lost her husband forever. Desperate to win him back, she’ll do whatever it takes to discover how she failed and capture again the love of a man bound to the queen.

No Comments on Glastonbury Tor by LeAnne Hardy

The ancient olivewood drinking bowl that young Colin finds in the treasury of Glastonbury Abbey, was disregarded as worthless wood by King Henry VIII’s men when they inventoried the abbey’s treasures. But Father Dunstan, the tortured prior who preaches forgiveness, treasures it. Father Bede, as demanding as the hated father from whom Colin has fled, covets it. Abbot Whiting finds in it the courage to face his enemy, even as monasteries are being dismantled all over sixteenth century England. Will Colin find the personal faith and sense of worth he seeks? Can he ever forgive his father… or himself?

No Comments on Beyond the Sacred Page by Jack Cavanaugh 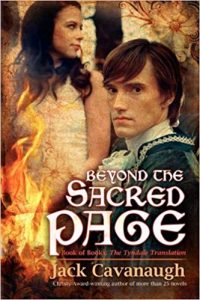 He has always loved her…and only her. She’s in love with a book and a cause he has vowed to destroy.

1535. A passionate heretic hunter, Pernell Foxe has dedicated his life to protecting the sacred Scriptures from those infidels who translate it into the vulgar tongue and distribute it among the masses. Meg Foxe, his wife, is haunted by her violent past and tortured by nightmares. She finds comfort in her husband’s arms…when he’s home. Then one night, soldiers pound on her door and whisk her away to Whitehall Palace to help calm the tempestuous Anne Boleyn, Queen of England. While there, Meg confiscates a banned New Testament from three of the queen’s attendants, intending to destroy it. But the book falls open, and she is captivated and soothed by the words….

The story of a vulnerable woman, a driven man, and a remarkable book.