I have this book on my bedside table right now! I haven’t started it because, well life, but it’s waiting for me! Maybe you’ll put it on your bedside table too, maybe even win it through the giveaway below!

PLUS – Roseanna is holding a special giveaway for her release, including a beautiful necklace Roseanna made herself! Make sure you check it out.

The first week of 7th grade, I decided I was going to write a novel—and finish it, unlike all those others I’d started. I’d recently fallen in love with historical fiction thanks to Lori Wick’s books, so naturally I decided it had to be a historical romance—never mind the fact that I was only 12 and had certainly never been in love, LOL. Over the course of the next year and a half, I wrote Golden Sunset, Silver Tear…a story of a girl raised as a princess in a small kingdom, but who was really the daughter of English nobility. The story of a girl who unwittingly carried her parents’ secrets with her all the years she was away—and who then had to find the truth about their deaths when finally she came home as a young woman to the land of her birth. Fast-forward 20 years, and most everything about that book had been rewritten a gazillion times, until we ended up with The Lost Heiress—a story about a girl raised as an illegitimate daughter to a prince of Monaco, who then learned she was the heiress to a Yorkshire earl…and who had unwittingly carried the secrets of her mother’s death with her all those years. That kernel has remained the same—while absolutely everything else has changed, LOL.

(Melissa says: Oh my, it was 7th grade when I read my first Lori Wick, and well, I didn’t write until I was in my late 20s, but she’s the reason I’m in love with Historical Romance too!)

Love this question!!! My favorite character turned out to be one who hadn’t existed in any of the previous drafts of the book—Brook’s father, Lord Whitby. Originally I’d meant for both her parents to have been killed, but for the purposes of her inheritance, I finally decided it made more sense to have her father still alive…which then gave me a whole plotline I’d never had before, of Brook reunited with and getting to know the man who had been searching for her for eighteen years. I absolutely adore Whitby, who has that dry British charm I find so amusing. And when I told my editors that he was a new addition, they looked at me like I was insane—because really, how did this story ever exist without him?? I have no idea.

That would have to be my big middle-twist in chapter 17…which is also The First Kiss. =) In the editing process, some revisions to the pacing of the love story made one of the editorial team suggest getting rid of this, but I just couldn’t—I changed everything else about the romance, but not that! LOL. This is a kiss, but it’s more—it’s Brook being typically-Brook and running headlong into a dangerous situation just to resolve a disagreement. It’s Justin battling with his demons. It’s stolen cars and injuries and…just yeah. The moment where everything between them changes, and there’s no going back. The End of an Era, as they come to think of it. And the beginning of something altogether new.

Roseanna is giving away a copy of her book and I’m giving away winner’s choice of ebook of any of the books mentioned above. Enter the Rafflecopter below!

Make sure you check out her cool prize package on her website: 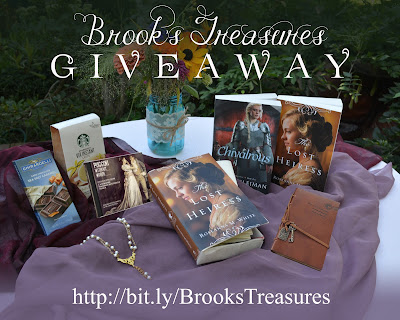 When I was 12 years old, I didn’t read much. I wanted to love reading, but since I was a slow reader I often got discouraged. I didn’t start reading more before I was about 14. Then, I stopped again and only started reading a lot more about 1 year ago 😉

Roseanna’s books sound really good. Thanks for the giveaway!

When I was twelve I loved Nancy Drew, Anne of Green Gables, and Little Women.

I really can’t say I remember what I read at 12-years of age, EB White, Charlotte’s Web, Beverly Cleary and Judy Blume

I was totally into the Nancy Drew series. I didn’t start reading Christian Historical Fiction until my early 20’s when my grandmother gave me a couple books in Gilbert Morris’ House of Winslow series.

I had already read Little House books and my favorite, Pippi Longstockings. By age 12 I was into all the teen magazines, especially if they had Herman’s Hermits in them. (I’m now showing my age!)

Some authors I have read. Others are new to me.

I wasn’t reading at age 12 too many home problems.

I don’t remember exactly what I was reading at age 12, but I know I already had a love of reading! I was probably in my early teens when I started reading Janette Oke’s Love Comes Softly series.

I loved reading Nancy Drew books when I was growing up. My love for books started when my mom would take me every week to the library. There were so many books to choose from. I felt like I had a treasure every time I picked up one to read. I love historical fiction because of the eras you get to read about. The stories take you to places that are intriguing and you learn a bit about that era.

I believe at age 12 I was reading Trixie Belden books. I loved that series.

FYI: Roseana White newsletter link BROKE! Everry time I tried to use the link you provided to sign up for Roseanna White’s newsletter, the link was down & said: ‘Page Not Found’. I entered that I did sign up as I did try & explained this & gave my email address in the ‘Email you used to sign up’ field.

It works for me Alison, but you can subscribe on Roseanna’s website’s contact page, here http://www.roseannawhite.com/wordpress/contact
Hope that works for you.

Oh dear let’s see….I think Anne of Green Gables maybe. I read more now than I did back then! LOL! I loved {and still do 😉 } Wuthering Heights and Jane Eyre also.

When I was twelve, I read anything I could find by L.M. Montgomery. I loved the Anne and Emily series. I must also admit monthly trips to the bookstore to buy the latest Sweet Valley books.

You’re one of the only people I’ve heard reference the Emily series too! They were my favorite Montgomery books. Not surprising since Emily was a writer too. =D

It’s been quite a long time since I was twelve so I don’t remember for sure what I was reading. However, I do know I was reading quite a bit. Nancy Drew was a favorite when I was a girl so I was probably reading them when I was twelve. I’m not sure if I was dipping into my mom’s stash of Perry Mason novels or if that was later. I’ve always liked mysteries and romance.

Yes, my young girl days were filled with Nancy Drew and the Hardy Boys mysteries. Loved them and wouldn’t mind reading them again.

When I was 12 I was reading everything I could find that my Mom would let me read. Right about that time my sister had several Grace Livingston Hill and Mom let me read her book “Kerry”! That’s all it took I wanted to read them all!

My favorite books when I was 12 were….. the Mandie series by Lois Gladys Lepard and the Trixie Belden series. Oh, and Lois Walfrid Johnson’s books! All good! 🙂

At age 12, I was in 6th grade and I remember locking myself in the bathroom to finish Superfudge by Judy Blume. Don’t ask me why I chose the bathroom, it wasn’t like I didn’t have a bedroom. Maybe it was the only room in the house that you could actually lock. 🙂 I told my 6th grade teacher (my favorite teacher of all time, btw) about the book and he then chose to read it to the class. Although I don’t remember everything about the book, I remember how much I enjoyed it and how funny it was. Prior to that, my favorite book was a biography of Helen Keller that I read too many times to count.

Two of my favorite books were The Little Princess and The Secret Garden by Frances Hodgson Burnett. Both of these were historical fiction with some mysterious events and characters included.

I loved Nancy Drew mysteries and Little Women and most any book I could get my hands on!

I loved going to the library and finding the Hardy Boys, Beverly Cleary and any mystery.

[…] Interview and Giveaway on the Historical Christian Fiction Index […]