Wait a minute. Wasn’t Naomi Rawlings just on here? Why yes she was back in January with The Wyoming Heir! She’s got two out this year, and being my lovely crit partner and friend, I hope you all are putting these on your wishlist if not buying them immediately! Love Inspired paperbacks sell out quickly, so if you want a paper copy of The Soldier’s Secrets, order this month! 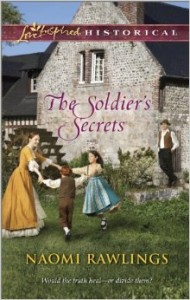 Brigitte Dubois will do anything to keep her family safe. When she is blackmailed by her father-in-law, his quest for revenge leaves her no choice. To protect her children, she must spy on the man who may have killed her husband. But Jean Paul Belanger is nothing like she expected. The dark, imposing farmer offers food to all who need it, and insists on helping Brigitte and her children.

Everything Jean Paul did was in the name of liberty. Even so, he can never forgive himself for his actions during France’s revolution. Now a proud auburn-haired woman has come to his home seeking work and has found her way into his reclusive heart. But when she uncovers the truth, his past could drive them apart…. 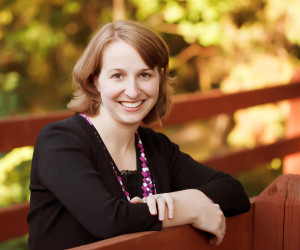 The hero, Jean Paul Belanger. I love taking a former troublemaker and getting to reform him (or her).

(Melissa says, you and Julie Lessman. 🙂 Though I ended up liking Jean Paul better than I did Charity. I’m still out on her, I’ll have to read more to the series to see if Charity ever wins me over!)

Which scene is your favorite, the one you never tired of working with? Give us a reason to look forward to it.

I have one scene where my heroine, Brigitte, is trying to defend Jean Paul to one of her father-in-law’s guards. She’s very ardent in her defense, claiming he’s gentle, caring, and compassionate, but the entire time, she has doubts in her head. As much as she wants to believe Jean Paul, she doesn’t really know if she can trust him. It was a fun scene to write with the conflicting emotions and war inside my heroine’s head.

Why did you choose the year your book is set?

This book is a sequel to my first novel, Sanctuary for a Lady. So I had to choose something set after 1794, and I wanted a relatively peaceful time of the French Revolution so that I could focus on matters on Jean Paul’s farm rather than an invading army or some such. That made the summer of 1795 (about a year after my first novel takes place) the perfect time.

Other Books in this Series:

What is your home on the web?

What other Christian Historical Novels are similar to yours in setting or storyline?

The first book in my Belanger Family Saga, Sanctuary for a Lady, is similar, of course. Another Christian novel set during the French Revolution is Love’s First Light by Jamie Carie.

If your job was to sell one author’s historical fiction (besides your own) which author’s wares would you want to peddle?

Julie Lessman’s novels would be a close second though, as would Roseanna White’s.

(Melissa says, I’ll just pick my favorites of the one’s I’ve read from these. Of course the favorite of my own novels isn’t even bought yet, maybe it will be! So I’ll just pick the one available 🙂

What Christian Historical Novel are you most excited to read that hasn’t yet come out?

A Bride in Store by Melissa Jagears—which releases in September.

I’m also really excited about Circle of Spies by Roseanna White, which released on the same day as my novel. Both of our stories feature spies, which is pretty fun.

What Christian Historical Novel in your To Be Read pile is begging you to make time to plop down with it right now?

Dare to Love Again by Julie Lessman. It’s staring at me from my kindle (and has been for the past couple months). All I need to do is open it up and begin reading . . . so why haven’t I started it yet??? Am I the only one who procrastinates reading books I know I’m going to like?

(Melissa says: I tend to read scenes and sections over and over at the end of a book I’m enjoying to keep from getting to the end too quickly.)

We are giving away two copies of The Soldier’s Secrets – Enter the Rafflecopter this weekend for one of two chances!

Yes I do procrastinate reading books I know I will like. I am not sure why. I have a huge TV stack too. In my Kindle and paperback. But I am beginning to organize them so I know what I have and read my favorites first!
I love the interview. I can tell the two of you are friends just by reading it. And great favorite book choices!

Thanks Nancy! And it’s good to know I’m not the only one who procrastinates reading those books. 🙂

I procrastinate only when I know that I have something that needs to be done because otherwise I know I will be too distracted by the book! 🙂

Yes, there are those that I know will eat up every hour I can possibly afford!

I’m also waiting to read Dare to Love Again. I think I’m saving it as a reward – for something I haven’t done yet. Wish I could figure out what it is so I can do it and read.

You made me laugh, Cindy, I hope you figure out what you can do that’ll make it worth it!

I’ve since read Dare to Love Again and did enjoy it. Glad to see I’m not the only Julie Lessman fan around these parts. 🙂

A little, because I know that once I start I won’t be able to stop and then it will be over too soon. Definitely adding this book to my TBR list.

No, I just have so many to choose from I almost have to close my eyes and point at a book, lol. But, if the book is part of a series I would have to check to see if it’s the first one or if I’ve already read the previous ones in that series so I can read them in order.

Wendy, I employ my 7 year old to help with that, I put out like 5 I want to read next (which is hard enough to figure out) and then she picks for me! Or does eeny meeny miney mo for me.

Hmmm . . . I should try that method with my boys sometime, Melissa. And I’m with Wendy in wanting to read a series in order. 🙂

I never procrastinate with a good book. Unless you are referring to procrastinating getting other work done. =)

Sometimes I do. It depends on how busy I am at the time. Thanks for the chance to win!

I have those days too, Beth. And then there are the other days where all I do is sit and read. 🙂

I work better under pressure, so sure I procrastinate. All the books listed above look great I have not read any by Roseanne White or by Naomi Rawlings, however I love Melissa Jagears and Julie Lessman. So I’m sure I would love the others.

Would you believe that I’m usually not a procrastinator? I was the kid in college who had her term paper finished two weeks early and ready to turn in.

Do I procrastinate reading books that I know I am going to like? Sometimes I am afraid I do. The choices out there are so great and if I find an author I really like their writing style, then I want to read all I can find of their work…..so that puts other choices on hold. I just love reading.

I know what you mean, Kathy. I easily get swept away in a certain book series and everything else gets put on hold. 🙂

I tend to save special books I want to read for just the right time… I have quite a TBR pile of books!

I know what you mean, Merry. Some books are just perfect for a long weekend or a night curled up by the fire. 🙂

I do procrastinate. And what is even crazier, when I am getting to the end of a book I love, I will drag my feet in reading because I don’t want the book to end. Nutty, I know!

Now that I never do. If anything, I skip ahead and read the ending so that I know everything works out for the couple, then I go back and read the middle. LOL! That probably makes me just as nutty as you!

Sometimes I do procrastinate, but only because I have so many in the to be read pile that I know that I will like.

I dont procrastinate Im the opposite I want to read it in the parking lot of the Post Office. God bless u
Chri

Thanks to everyone who’s stopped by. I’ve enjoyed meeting all of you!

I am an Amazon Affiliate and accordingly, most of the Amazon links in any of my posts are “affiliate links.” This means if you click on the link and purchase the item, as an Amazon Associate I earn from qualifying purchases.