Search through Christian Historical Fiction sorted by setting, period, historical events, and more.
No Comments on The Crying for a Vision by Walter Wangerin Jr. 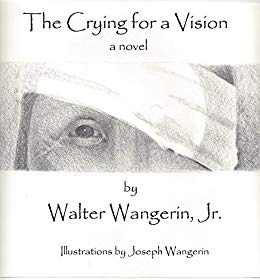 Moves Walking–Waskn Mani–is an unusual boy. To the amazement of his fellow Lakota tribesman, he does not hunt or fight. Instead he stitches clothes, supple and warm–and the beauty of his quillwork has never before been seen. So when Moves Walking challenges Fire Thunder, the fiercest of all warriors, nobody can understand why or how he would dare. Fire Thunder’s thirst for battle has made him a living legend–revered by his people and feared by his enemies. He is going to lead the Lakota to victory over everything and everyone, and no boy is going to stop him.

But Moves Walking knows the truth about Fire Thunder’s path to glory. He knows it will lead to the destruction of his people as well as their enemies. But Moves Walking also knows that to bring the Lakota back to life and hope, he will have to make the greatest sacrifice of all.