Search through Christian Historical Fiction sorted by setting, period, historical events, and more.
No Comments on Between the Wild Branches by Connilyn Cossette

Ten years ago Lukio fled Kiryat-Yearim, where he’d been adopted by the Levite family who guarded the Ark of the Covenant. Feeling betrayed by everyone, he returned to his birthplace in Philistia to become a famous fighter. Now the champion of Ashdod, Lukio has achieved every goal with the help of his ruthless cousin. But just as he is set to claim the biggest prize of all, the daughter of the king, his past collides with his present in the form of Shoshana.

After a heartbreaking end to her secret friendship with Lukio, Shoshana thought to never see the boy with the dual-colored eyes and the troubled soul again. But when she is captured in a Philistine raid and enslaved
in Ashdod, she is surprised to find that the brutal fighter known as Demon-Eyes is Lukio himself.

With explosive secrets and unbreakable vows standing between them, finding a way to freedom for both may cost them everything.

No Comments on To Dwell among Cedars by Connilyn Cossette

Eight years ago, when the Philistines stole and then surrendered the ark of the covenant back to the Israelites, Eliora left her Philistine homeland to follow the ark to the community of Kiryat Yearim. There, the family she was adopted into has guarded the ark at the top of a mountain in seclusion.

Ronen is a Levite musician determined to secret away the ark to a more fitting resting place, watched over by priests who would restore the Holy of Holies. He never expected that the Philistine girl he rescued years ago would now be part of the very family he’s tasked to deceive.

As Ronen’s attempts to charm Eliora lead them in unexpected directions, betrayal leaves Eliora with strained family ties and Ronen questioning his own loyalties. Ultimately, Eliora and Ronen are caught up in the battle for the soul of Israel and its future under the leadership of Samuel, the last judge before the era of the kings begins.

No Comments on Like Flames in the Night by Connilyn Cossette

Strong-willed Tirzah wants to join her people in driving the enemy from the land of Israel and undergoes training for a secret mission inside the stronghold of Shechem. But soon after she has infiltrated the ruthless Aramean commander’s kitchen, she makes a reckless decision that puts her and her allies in grave danger.

Fresh off the battlefield, Liyam returns home to discover his beloved daughter is dead. After his vow to hunt down her killer leads to months of fruitless pursuit, his last hope is in a family connection that comes with strings attached. Strings that force him to pose as a mercenary and rescue an infuriating woman who refuses to leave her mission uncompleted.

When an opportunity to pave a path to a Hebrew victory arises, can Tirzah convince Liyam to fight alongside her in the refuge city of her birth? Or will Liyam’s thirst for vengeance outweigh his duty to his people, his God, and the woman he’s come to love?

No Comments on The Healer’s Touch: Tikva’s Story by Connilyn Cossette 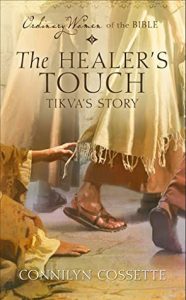 When Jewish sailor’s wife Tikva received word, more than a decade ago, of a family tragedy, the shock of the news sent her into premature labor, and she delivered a stillborn son. From that time until this, despite chasing after a multitude of healers’ promises and spending all she had on torturous treatments, she hasn’t been able to stop the resulting hemorrhaging. The doctor she saw today, like all the others, had given her lofty promises of a cure but turned out to be yet another charlatan. Defeated, Tikva returns home to her aged mother-in-law, who has heard tell of a miracle-working Rabbi visiting their province. Does Tikva dare hold out one last hope for healing?

No Comments on Until the Mountains Fall by Connilyn Cossette

Recently widowed, Rivkah refuses to submit to the Torah law compelling her to marry her husband’s brother and instead flees Kedesh, hoping to use her talents as a scribe to support herself. Without the protections of her father, Kedesh’s head priest, and the safety of the city of refuge, Rivkah soon discovers that the cost of recklessness is her own freedom.

Malakhi has secretly loved Rivkah for years, but he never imagined his older brother’s death would mean wedding her himself. After her disappearance, he throws himself into the ongoing fight against the Canaanites instead of dwelling on all he has lost. But with impending war looming over Israel, Rivkah’s father comes to Malakhi with an impossible request.

As the enemies that Rivkah and Malakhi face from without and within Israel grow more threatening each day, is it too late for the restoration their wounded souls seek?

No Comments on Shelter of the Most High by Connilyn Cossette

The daughter of a pagan high priest, Sofea finds solace from her troubles in the freedom of the ocean. But when marauders attack her village on the island of Sicily, she and her cousin are taken across the sea to the shores of Canaan.

Eitan has lived in Kedesh, a City of Refuge, for the last eleven years, haunted by a tragedy in his childhood and chafing at the boundaries placed on him. He is immediately captivated by Sofea, but revealing his most guarded secret could mean drawing her into the danger of his past.

As threats from outside the walls loom and traitors are uncovered within, Sofea and Eitan are plunged into the midst of a murder plot. Will they break free from the shackles of the past in time to uncover the betrayal and save their lives and the lives of those they love?

No Comments on A Light on the Hill by Connilyn Cossette

Seven years ago, Moriyah was taken captive in Jericho and branded with the mark of the Canaanite gods. Now the Israelites are experiencing peace in their new land, but Moriyah has yet to find her own peace. Because of the shameful mark on her face, she hides behind her veil at all times and the disdain of the townspeople keeps her from socializing. And marriage prospects were out of the question . . . until now.

Her father has found someone to marry her, and she hopes to use her love of cooking to impress the man and his motherless sons. But when things go horribly wrong, Moriyah is forced to flee. Seeking safety at one of the newly-established Levitical cities of refuge, she is wildly unprepared for the dangers she will face, and the enemies–and unexpected allies–she will encounter on her way.

No Comments on Wings of the Wind by Connilyn Cossette

Wings of the Wind

Alanah, a Canaanite, is no stranger to fighting and survival. When her family is killed in battle with the Hebrews, she disguises herself and sneaks onto the battlefield to avenge her family. The one thing she never counted on was surviving.

Tobiah, a Hebrew warrior, is shocked to find an unconscious, wounded woman among the Canaanite casualties. Compelled to bring her to a Hebrew healer back at their camp, he is soon confronted with a truth he can’t ignore: the only way to protect this enemy is to marry her.

Unused to being weak and vulnerable, Alanah submits to the marriage–for now. As she comes to know and respect Tobiah and his people, however, she begins to second-guess her plans of escape. But when her past has painfully unanticipated consequences, the tentative peace she’s found with Tobiah, the Hebrews, and Yahweh is shaken to the core. Can Alanah’s fierce heart and strength withstand the ensuing threats to her life and all she’s come to love?

No Comments on Shadow of the Storm by Connilyn Cossette

Shadow of the Storm

Having escaped Egypt with the other Hebrews during the Exodus, Shira is now living in freedom at the foot of Mt. Sinai, upon which rests the fiery glowing Cloud containing the shekinah glory of God. When the people disobey Yahweh and build a golden idol, the ensuing chaos gives Shira an unexpected opportunity to learn the arts of midwifery. Although her mother wishes for her to continue in the family weaving trade, Shira’s gifts shine brightest when she assists with deliveries. In defiance of her mother, Shira pursues her heart’s calling to become an apprentice midwife.

When a delivery goes horribly wrong, Shira finds herself bound to a man who betrayed her, the caretaker of three young children, and the target of a vengeful woman whose husband was killed by Shira’s people, the Levites. As contention between the Hebrew tribes and the foreigners fans the flames of another dangerous rebellion, Shira will come face-to-face with the heartbreak of her past that she has kept hidden for so long. How can she let go of all that has defined her to accept the love she’s denied herself and embrace who she truly is?

1 Comment on Counted With the Stars by Connilyn Cossette

Sold into slavery by her father and forsaken by the man she was supposed to marry, young Egyptian Kiya must serve a mistress who takes pleasure in her humiliation. When terrifying plagues strike Egypt, Kiya is in the middle of it all.

To save her older brother and escape the bonds of slavery, Kiya flees with the Hebrews during the Great Exodus. She finds herself utterly dependent on a fearsome God she’s only just beginning to learn about, and in love with a man who despises her people. With everything she’s ever known swept away, will Kiya turn back toward Egypt or surrender her life and her future to Yahweh?

See All the Books

Scroll Through the Books Chronologically