Search through Christian Historical Fiction sorted by setting, period, historical events, and more.
No Comments on A Love Forbidden by Kathleen Morgan

A Love Forbidden (Heart of the Rockies)

Moved by the desire for adventure and a yearning to help the Ute Indians, twenty-year-old Shiloh Wainright impulsively accepts a teaching position at the White River Indian Agency in northwestern Colorado. The new job, however, isn’t what she imagined it would be, and Shiloh soon finds herself caught in the cross fire between the Utes, their unyielding Indian Agent, and the unrealistic demands of the US government. Her unexpected encounter with Jesse Blackwater, an embittered half-breed Ute and childhood friend, only complicates matters as they battle their growing feelings for each other amidst the spiraling tensions threatening to explode into a catastrophic Indian uprising.

Set amongst the wilds of the Colorado Rockies in 1879, this is a tale of a forbidden love and a faith tested in the cauldron of intolerance and the harsh realities of life on the untamed frontier. Bestselling author Kathleen Morgan deftly explores themes of mercy, fidelity to one’s beliefs despite what others think or do, and compassion for those different from oneself as she plumbs the depths of the human heart and the healing power of God’s love.

No Comments on A Heart Divided by Kathleen Morgan

It is 1878 and the Caldwells and Wainwrights have been feuding for decades. Still, Sarah Caldwell has misgivings when her father pressures her into distracting a ranch hand while he and her brothers rob the Wainwright place. When it becomes clear that hand is actually Cord Wainwright, Sarah realizes she needs to lay low. But Cord spots her in town and, with the sheriff away, makes a citizen’s arrest, dragging her off to the Wainwright ranch until the sheriff’s return. As the feud boils over, Cord and Sarah make a most inconvenient discovery–they are falling in love. Can they betray their families for love? Or will their families betray them?

Against the beautiful and wild backdrop of the Rocky Mountains comes this sweeping saga of romance, betrayal, and forgiveness from beloved author Kathleen Morgan.

No Comments on As High as the Heavens by Kathleen Morgan

As High as the Heavens

It is 1568 and Mary, Queen of Scots, is imprisoned in Lochleven Castle. But her supporters, including noblewoman Heather Gordon, are planning a rescue. Heather travels to a cottage in the frigid Highlands to teach a simple man–who just happens to resemble someone with access to Lochleven–how to act the part of a nobleman in order to gain entry to the castle. But in the close quarters of the cottage there is more stirring than political rebellion.

No Comments on Child of the Mist by Kathleen Morgan 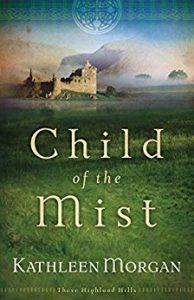 In the harsh Scottish highlands of 1565, superstition and treachery threaten a truce between rival clans. It’s a weak truce at first, bound only by an arranged engagement between Anne MacGregor and Niall Campbell-the heirs of the feuding families.

While Niall wrestles with his suspicions about a traitor in his clan, Anne’s actions do not go unnoticed. And as accusations of witchcraft abound, the strong and sometimes callous Campbell heir must fight for Anne’s safety among disconcerted clan members. Meanwhile his own safety in threatened with the ever-present threat of someone who wants him dead.
Will Niall discover the traitor’s identity in time? Can Anne find a way to fit into her new surroundings? Will the two learn to love each other despite the conflict?